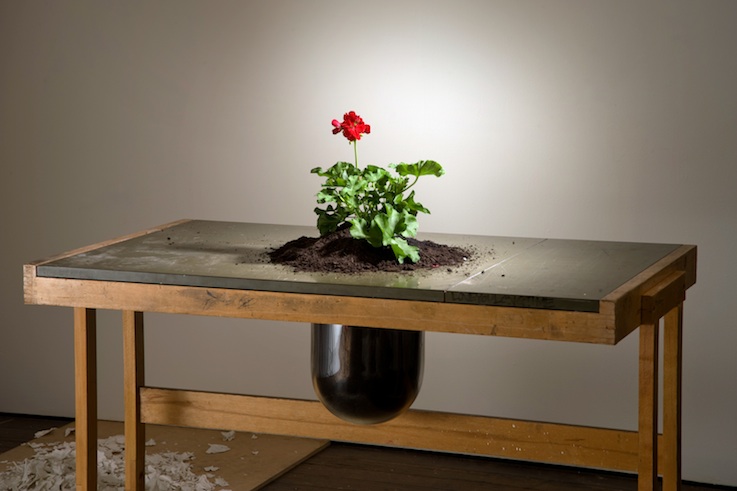 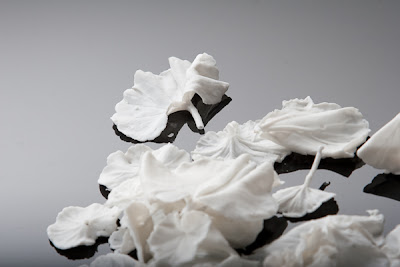 Crumbling Ecologies interrogates the impact of the economic climate on both environmental conservation and arts education in Melbourne. In times of economic crisis both art and conservation funding is cut, raising questions on their value to culture and society.

A response to the ongoing threatened closure of many media specific courses across Victoria, the works examine the relevancy of these materials within contemporary arts practice and the impact the loss of educators will have on Melbourne’s artistic culture.

In many parts of the world there are species of geranium that are critically endangered or extinct. In Australia the garden geranium is on the Australian National Heritage Trust’s Alert List for Environmental Weeds that threaten biodiversity and cause environmental damage. Soon to become a huge pest to Victoria’s native flora and fauna, they are one of the most popular commercially sold garden plants.

In Melbourne, geraniums sit ambiguously between a plant and a weed deriving connotations of being out-dated and old fashioned. One of the key arguments used to justify the closure of the craft studios is that these materials and practices have become out-dated and no longer relevant to contemporary arts practice and research.

Geraniums symbolise the economic impact on the ecological equilibrium and the importance of actively preserving craft as a diverse form of contemporary arts practice.

The environmental themes addressed within the Crumbling Ecologies project sit within the broader arts context of recent contemporary Australian art that deals with our perception of environmental change as explored in exhibitions such as Stormy Weather NGV, Heat RMIT and In the Balance, Art for the Changing World MCA Sydney. These exhibitions present works that became a catalyst for environmental and social change.

To register to be involved and for more details go to - http://craftvic.org.au/whats-on/exhibitions/skills-swap-meet

To get involved in The Crumbling Ecologies Project, or to find out more please contact - jasminetargett@hotmail.com